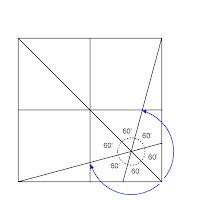 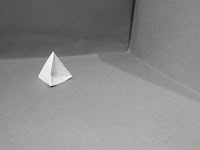 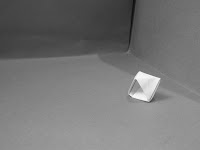 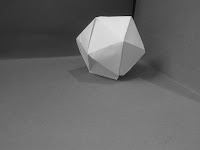 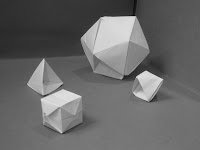 So after looking into Paul's folds and proving that he was indeed using origami to fold a 60' angle(see attached picture). I began making shapes.
These shapes are known as platonic solids.  The water bomb is the cube and the other three shapes are all based on the equilateral triangles that Paul showed me.  I liked the idea of leaving one face open so you can see the interior as well as the exterior.  All of these models were made from one piece of paper which I also like in a weird flat surface to solid regular shape kind of way.
There is of course the Dodecahedron missing from this group but I haven't even figured out how to make a pentagon yet let alone a 12 sided figure with pentagons.  Always something to work on though.
Posted by memo cube at 09:19 No comments: 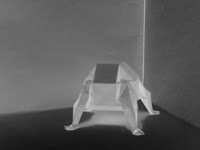