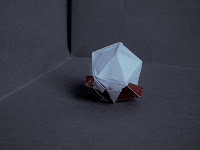 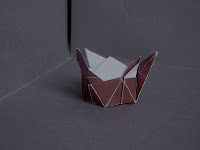 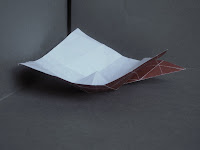 So lots of prattle and even the sequencing on Blogger has changed but here is what I was getting at with the Akira modeling.

I recommend clicking on an image then flicking through the three images.
Posted by memo cube at 23:27 No comments: 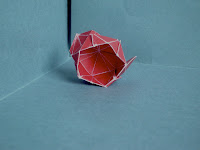 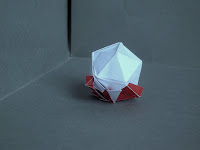 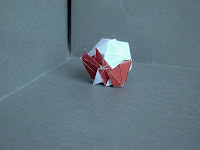 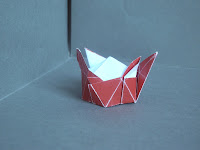 Now Blogger is getting a bit random with its image allocation but we will try till it dies I suppose.

So... the Akira movie has a wonderful dancing computer graphic to illustrate the power of Akira. I think this dual colour paper model does a pretty job of illustrating the same thing.

That is actually all. I also think this is a much better resolution of the icosahedron I devised earlier.
Posted by memo cube at 20:17 No comments: 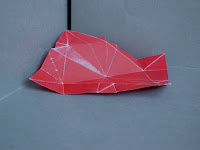 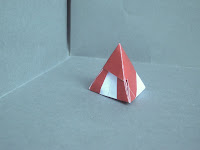 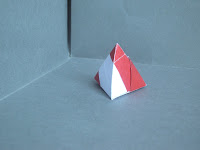 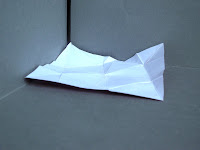 Hello. I am afraid to say I have discovered colour. Especially colour one side and white the other. The capacity for contrast is lovely and if you print the colour by inkjet it gives such clearly defined fold patterns. Here is my tetrahedron in red and white. Hmmmm....
Posted by memo cube at 19:39 No comments: 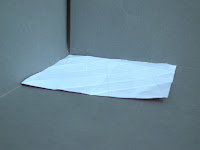 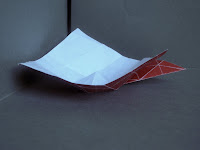 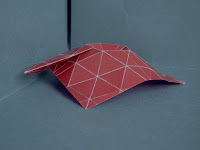 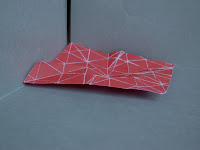 The Surrey Quays library opened recently with the all the fanfare that a library usually gets. None really. It had an opening and I didn't go and a few weeks later I went to see what my lovely partner was so excited about. ... You guessed it books.

Now you would think I would have searched out the new crafting sections and found all the
best origami books but no. I am much more basic than that. Comics. I am currently absorbing Robert Crumb's Book of Genesis and it is lovely. It however is not representative of the wonder of this new collection of comic wealth. There are series. I mean all of Swamp Thing, Sandman, Hellboy,Bbatman - killing joke, Lone Wolf and Cub, 20th Century Boys... and all of Akira.

At work I overheard a conversation about geodesic domes. ( Don't worry, this is still relevant.) I like the mathematics of geodesic domes. I like the fact that they are based upon the structural principal of spheres and I really like that they use the basic selection principal of the platonic solids. That all points on the shape correspond with points on the surface of a sphere. The arch is based upon this principal was later given another dimension by Walther Bauersfield and reinvented later again by Buckminster Fuller. At least that is what Wikipedia tells me.

This reminded me of my platonic solids and the annoying fact that I could never fully resolve the excess paper from the spare sides of the shapes except the tetrahedron. I remade the icosahedron and realised I liked the excess paper as a swirl. Like the Kawasaki rose but not as stable or as regular.

This blog only lets me publish 5 images at a time so I will post Akira 2 shortly.
Posted by memo cube at 00:27 No comments:

Well here is the folding diagram I drew for the Stealth and Scrunch Fly that I previously mentioned. The diagram curiously starts after you have first folded the paper in a traditional union jack and then bisect two adjacent triangles along the top straight edge. I am not sure why I missed that out. But the description I gave before still holds. You fold the fly, undo it, fold it in half, scrunch it up, unscrunch it up and refold the fly now with texture.

This fits into my chaos origami style at an early stage as it is more textural than structural. This structural chaos is in the Crystal Flower and now the sphere experiments also mentioned recently.
Posted by memo cube at 16:06 No comments: