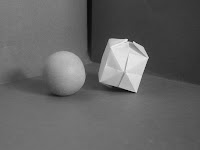 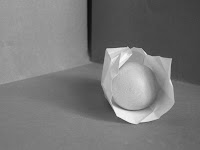 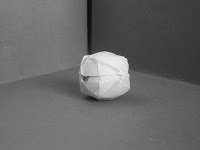 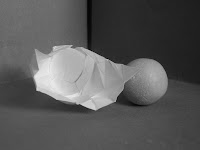 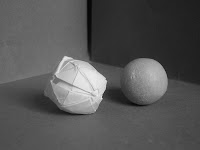 Sorry to have skipped Chaos 2 but that is an origami fly that involves folding the entire fly model, dissassembling it, folding it in half, crushing it, uncrushing it, and refolding it. The design is one of the first I have illustrated by hand and I will find the drawings soon and post it.

So... Chaos 3: The Origami Sphere 1.
I have a plan to make an origami sphere. Much like any 'plan' with origami such an idea takes a long time to articulate. I like the idea of an origami sphere as it is the perversity of taking a flat square and constructing the purest of curved 3D objects from it. This has lead to frustration and the image I have as my profile is in fact one of my early crushed pieces where I realised I could crush a piece of paper into a closer approximation of a sphere than I can fold one. It does irk me that I could not refold such a piece but as a base line it is strangely helpful.

So recently I had the idea of crushing an origami cube (better known as an origami balloon) around a clay sphere to see what folds it produced. And that is exactly what I did.
Posted by memo cube at 10:32