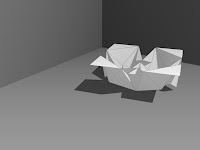 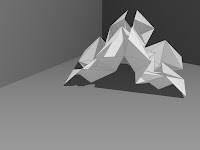 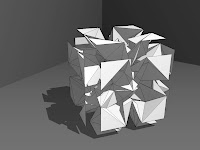 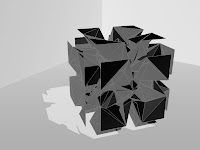 Sorry about the blogging splurge. Lots of old ideas to share but new stuff is happening.

I have been obsessing about virtual interpretations of origami for some time now. I have recently undertaken the mind bending project of making a 3d model of the hellraiser flower I wrote up in 2008. The inspiration is the idea that if models can be made of these objects then maybe someone can explain to me how to apply the geometry of movement to a 3d model so it can be animated. This would make the animations I have made much simpler to generate. I personally think the future of origami on the web is 3d models that you can get to fold in an animated way to get past the incomprehensibility of most advanced origami instructions.

So here is the hellraiser flower reinterpreted as a 3d object and posed to look like the images I posted of the real origami object. And I have also posted the sketchup model here which I can rotate in my browser but I am not sure how accessible this is.
Posted by memo cube at 15:44 No comments: 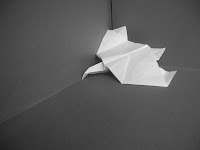 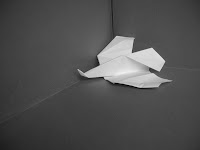 This is really a story about the pace of origami design and thought.

Last year I held a demonstration where I showed a group of varying ages and abilities some of my designs through a step by step instructional course. As with all these things participating in the performance denies any objective understanding of how it went. Suffice to say I was left with a sense of inept fumbling on my part.

There were to moments which really stuck in my mind.
Firstly; the boy who got bored and made up a great flea design of his own while waiting for me to teach him how to do a scorpion was truly humbling.
Secondly; one of the other boys quite reasonably asked if the bird I was folding could fly. Now the more mature audience quickly poo pooed the idea that it should and we carried on as if the question had never happened. The kid was right. Why not. We make paper planes that look nothing like planes but they fly. That is their job! Oh, from the mouths of babes grrrr.

So six or so months later while playing with the new base I have been working on I made this bird. I Have to admit that the look is a bit chunky but when I made it from a 21x21 cm (squared up a4) sheet it was aerodynamically sound!!!

My sister and I tested it of the roof of my studio building. It flew! A bit wonky like any paper plane but it flew.
Posted by memo cube at 11:43 No comments: 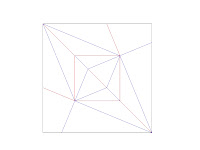 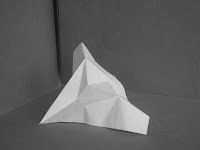 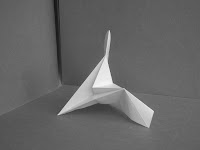 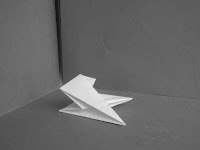 So this wave on the edge is a bit boring and I quickly moved to experimenting with it, I had tried to do it on 2 and 4 corners of a piece of paper thus the bulls head and bowl designs in the earlier post.

I then moved on to making the wave pattern work symmetrically towards the center. This is hard to fully explain so the crease pattern here and the subsequent images are hopefully clearer. The practical upshot is a new base fold pattern for me to work from.
Posted by memo cube at 10:37 No comments: