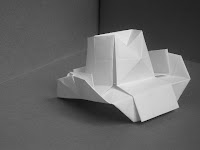 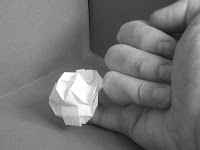 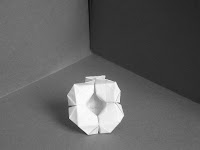 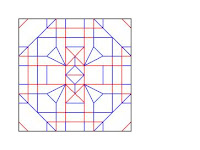 So about 12 years ago I made the mistake of telling a friend, Liam that I could make just about anything in origami.  In my defence I had just finished making all the models in a book I had but there is no excuse for such things.  So he quite fairly asked for a cowboy hat.  I was floored.  About 6 years later I finally got it.  There is an image of it in the shop window on top of the black knight earlier this month.
I was told that the Japanese folders just publish their crease diagrams and that this was quite annoying because it was almost impossible to figure out the folds from it.  I am thinking about doing a how to series on this design but have yet to do so but I have done a crease diagram and it is quite pretty, sorry.
Posted by memo cube at 08:40

Strange name which was chosen for this title fits in with the aesthetics and half of the overall package. The picture shows the typical tour. Excellent sound quality.

HI I would like to use this design for my fashion show this month could you please make a tutorial?????