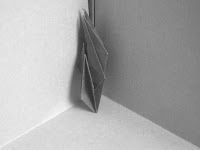 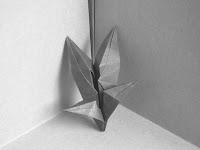 I just like grand headings I think. In origami there is room for chaos. That is to say it is possible to make a design that incorporates random elements. This is currently helping me resolve a long term goal which I will explain later but I thought a few older pieces of random origami might be good. I have made a few 'wrong' origami things in my time by, for example, starting a paper crane with a crease that is not down the middle and then trying to make all the other folds work. It is possible and I have made cranes and crabs this way that are quite wrong looking. From this exercise was born the crystal flower. This piece involves picking a random point on the paper. Then you fold creases between that point and each corner. Then you bisect these four creases by making valley folds from the original point and lining up the corner creases. Strangely this makes a sort of chaotic base that is a bit like the traditional square base. From this you flatten the four mountain folds and make petal folds a bit like making a frog base. and then you have an origami crystal I think like the dark crystal but that is just what my mind does.

If you unfold all of these petal folds , flatten the paper and push the point of origin the whole piece can be inverted. By starting with the smallest petals and folding them internally the flower is formed - an abstract non symmetrical mutant flower but a flower all the same.

I am not sure why I used black paper for this but I did resist inverting the image to make it look strange so at least that is good.
Posted by memo cube at 08:00